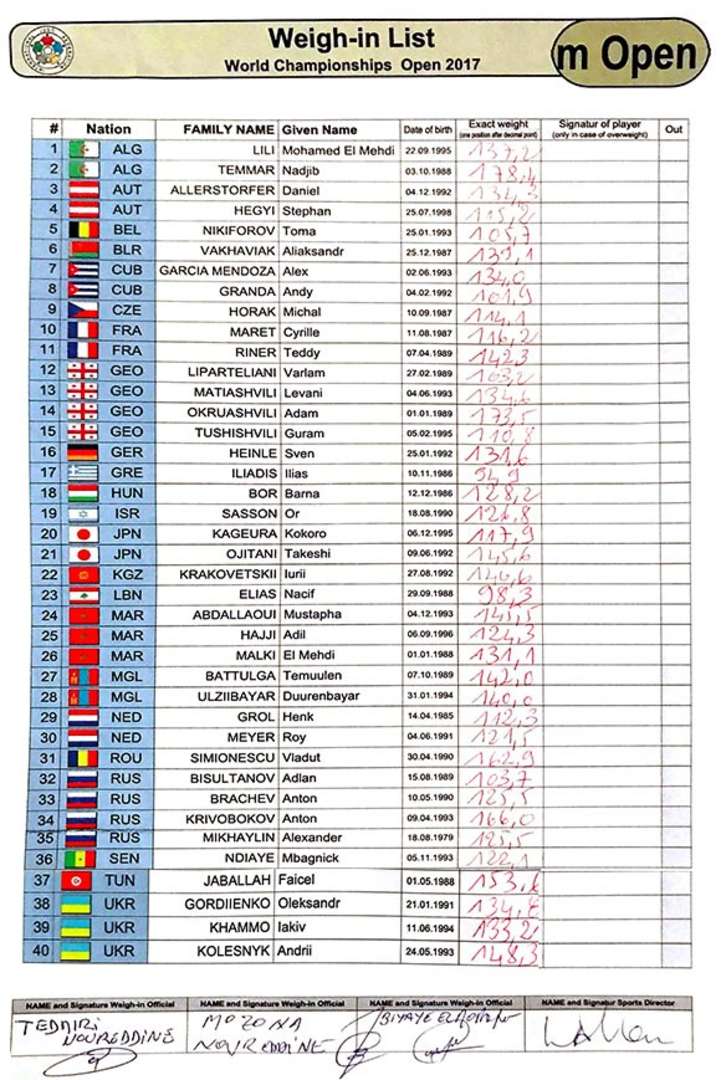 The Judo World Championship Open weight is a standalone competition, where anybody form any weight category can compete. In theory athletes of -60kg would be allowed to compete against the giants of +100kg, but practically the lightest athlete came from -90kg weight division.

Surprisingly enough, even though there is no weight limit, the athletes had to get their weight checked. The IJF has published the list of weights and it can give an interesting insight into how competitions would look if athletes didn’t cut weight. I believe that the competitors who had time to prepare focused on getting their body weight to its optimal weight, where they can perform the best.

The competition takes place over two days, one day for men and one for women. The IJF had published the list of men. 40 competitors are participating, and only 8 of them are not normally competing in the +100 weight category. 6 athletes come from -100kg and 2 from -90kg. The lightest athlete is Ilias Iliadis who came back from retirement. He weighed in at only 94.9kg, which makes you wonder if he had to cut weight at all to compete -90kg. The heaviest player is Nadjib Temmar weighing 178.4kg, nearly double as much as Iliadis.

Competitors who come from -100kg weighed in average 107.2kg

It’s interesting to see the real weights of the athletes that usually compete under a certain weight. For example, Henk Grol came in 112.3kg, while he’s normally fighting -100kg. He didn’t compete since the Olympics and maybe he’s planning to switch to the higher weight. Maret Cyrille is another player coming from -100kg, but weighing 116.2kg. In the Grand Slam of Abu Dhabi, he did go up to +100kg and won the event. Was this just a preparation for the World Championships or is he planning to stay there?

Without Maret and Grol the average weigh of athletes who came from -100kg is 103.6kg

I would expect them to weigh more, considering that -60kg athletes cut much more than 3.6kg. I guess that they felt that the best way to face much heavier athletes wouldn’t be to gain weight and play the same game but to be as fit as possible.

The most likely to win is not necessarily the heaviest

How would you approach an event like this? Increase your weight? The reason why many athletes cut weight is to have a strength advantage over lighter opponents. However, in +100kg and the open weight, this tactic is a bit tricky. I asked a +100kg fighter about it and he said that he believes it’s not just a matter of strength but also of condition. The heavier men in his category are the ones with the worst condition. They can barely stand for a whole fight.

I’ve read an interview with Riner where he said that he likes to lose a few kilograms before a competition to feel better in the fight. Maybe this is also the strategy Iliadis will be using. He could have opted to gain weight but instead, he stayed light. Maybe he’s hoping to use speed as his advantage?

The average weight of the competitors is 130.6 kg

When you think about it, when it comes to bodyweight – Riner himself not so far away from being an average guy. He weighed 142.3kg, while his competitors weighed 130.6kg. If we remove the -90kg and the -100kg athletes from the equation, the average weight is 136.9kg.

The battle of fighting styles

Thanks to the many different competitors from different weight categories, we will see more variety of fighting styles and tactics. The lighter fighters will have to count on their speed and condition, while the heavier will probably aim to score as fast as they can.

A fight between Iliadis and Temmar is not likely to happen, but I would love to see it if it does. It will be a pure fight of weight vs. speed and I’m sure both fighters will take their advantages to the extreme.

Fighting someone as heavy as Temmar will be a whole lot different than fighting someone like Iliadis who is maybe not the strongest but likely to be the quickest.