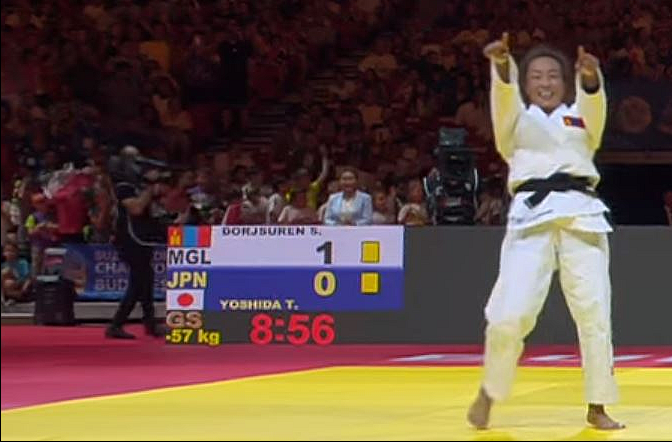 Today we recover from a whole week of spectacular judo as the World Championships came to an end. I have to say that I like the new rules. Giving an immediate hansoko-make for grabbing the leg was a bit too harsh, canceling out yuko is difficult for me to accept, but it makes judo much easier to understand for new spectators.

I especially like that shido doesn’t win fights anymore in regular time. Athletes stopped playing the shido game and are looking for positive scores. It makes the fights more appealing to the eye of the spectators. This new development also resulted in a lot more golden scores:

While the contest for men lasts now 4 minutes instead of 5 minutes, it didn’t seem to make the fights much shorter – 49.7% of the men’s fights were decided in the golden score. My friend, Tal Flicker who took home a bronze medal in -66kg, fought 5 out of his 6 fights in golden score.

The final of Dorjsuren against Yoshida (-57kg) lasted almost 13 minutes. With the old rules, this would never have happened since Yoshida was already penalized in regular time for stepping out of the contest area. In the end, Yoshida lost, but it could have gone either way. As was the case in the semi-final -52kg in the fight between Kelmendi and Shishime. After 4 minutes of regular time Shishime had 2 shidos on the board, however she was able to turn the tide by scoring wazari in the 10th minute of the contest. With the old rules Shishime wouldn’t have been World Champion now.

It is often said that golden scores are a mental game, suggesting both athletes are equally tired and the strongest in mind will win. I don’t believe this is entirely true. Condition plays a major role here, coaches and athletes who won’t adapt will be left behind.

Then, there is nutrition: